In the May 24 edition of the New Scientist there is an article on the use of objective statistical analysis to investigated the effectiveness of policies, evidence-based policy similar to evidence-based medicine. Using randomized tests the effectiveness of various policies can be tested, although policy-making may not want to change their policies because of ideological reasons. An interesting example is a study on the effective of drug testing in UK prisons which led to an increase in the use of heroine. The reason was that cannabis can be traces for a longer period after use in urine. So, the use of drug testing aimed to reduce illegal drug use led prisoners to switch to heroine. Another example is the ideology that abstinence-only as the message in sex education is the best way to reduce HIV transmission although evidence shows that this is not a good strategy. Nevertheless the US government keeps on pushing for this particular, ineffective, policy.

I found some organizations related to evidence based policy like the Evidence Network, the Evidence-Based Policy in Development Network, the Coalition for Evidence-Based Policy and a journal called Evidence and Policy. Another related source is the book Super Crunchers by Ian Ayres which discuss in popular terms the methodology behind the evidence based movement. Recent developments in methodology (statistical tools, neural networks), cheaper and faster computing facilities, and especially lower costs of sharing and retrieving data lead to a boom in doing randomized tests in many different domains. Besides the usual 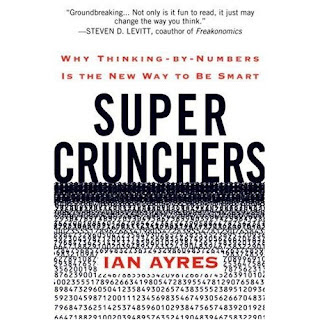 marketing applications (which wording of an internet add leads to most purchases), and medical applications, Ayres discuss a lot of examples related to public policy which as social programs and education policies.
Note that the main trust of this evidence based movement is how individuals react to a certain policy (or medicine or ads). I have not seen many examples that are relevant for scholars like me who are interested in studying the conditions for self-governance, an emergent property. I can imagine that we may start analyzing how groups in digitals environments are able to cope with similar problems like creation of open source software (some studies have been done but not very systematic), governance of common space in chat rooms and digital environments, etc.. Any suggestions?
Posted by Marco Janssen at 9:46 AM 1 comment: