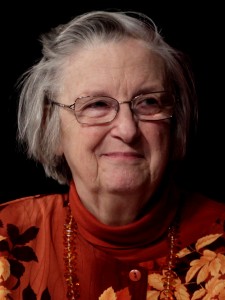 Lin Ostrom died today. She is a role model in many different ways. She was modest but persistent to pursue controversial questions in novel ways. Her interdisciplinary approach was natural to her. But such an approach was not widely accepted and the importance of her struggle of doing this interdisciplinary work was long not appreciated beyond a small community of scholars. In recent years her work got increasing recognition, including her Nobel. She opened the path for new generations who do interdisciplinary work on social-ecological systems.

I met her at a workshop of the Resilience Alliance in Stockholm in 2000. I experienced immediately a strong intellectual bond. I assume many others have had this experience too. Although I was not very well known with her work, we immediately found out that we had similar research interests. I presented at that workshop a paper on how to look at institutions and institutional change from an immune system perspective, and I was happily surprised she liked it. I was critical on a proposal she showed me on using agent-based models to study land use change. She invited me to visit Indiana University since they got the grant J. I did in January 2001. During that month I start seeing the world differently, namely seeing rules and incentives everywhere. We started a paper on modeling endogenous rule change in a population of agents harvesting a common resource.

My challenges to find a long term intellectual home in the Netherlands led me decide in Spring 2001 to ask Lin what she would think if I quit my job at the Vrije Universiteit in Amsterdam and come for some years to Bloomington. She warned me that it would be difficult to get back to a disciplinary road. I never regret my decision move to Indiana University. She has created a very stimulating environment with diversity of disciplines, ranks, color, etc. Unfortunately, Indiana University itself did not fully recognize the importance of interdisciplinary programs and I moved to Arizona State University in 2005 for a regular faculty position. Lin agreed that this would be better for me. Later I could convince her to accept a part-time research position at Arizona State University that enabled us to create a center for the study of institutional diversity (CSID) (named after her 2005 Magnus Opus “Understanding Institutional Diversity”). With Marty Anderies, who also was at the 2000 meeting in Stockholm, we developed a conceptual framework to study robustness of social-ecological systems, which was the intellectual foundation for CSID.

I stayed with Lin and Vincent for a week in April, just a few weeks ago. Lin was doing chemo and experienced many health challenges. Still she was energetic and did not wanted her health problems to be an excuse to miss a meeting. Despite her challenges she was optimistic. At the Planet under Pressure conference in March in London, Lin was called the hero of the conference. I agree. Moreover, for her risk taking, constructive attitude, curiosity, and persistence, she was a hero of the scientific community.

While many can attest to Lin being a friend and hero, you have described what her intellectual contributions mean for me personally: a home. Thank you, Marco, for your words and actions.