On July 19th a bridge collapsed on the I-10 that connects Phoenix with Los Angeles. Heavy rain caused flash flooding which eroded the eastbound bridge to give way. As a consequence the I-10, the main highway between Arizona and California was closed for a week and travelers had to drive a few 100 miles extra to go to their destination.
Is the bridge collapse a rare accident or can we expect more due to increased intensity of rainfall events and lack of maintenance of bridges (and infrastructure in general)? 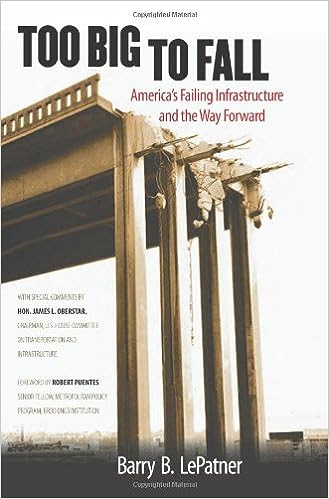 This bridge collapse coincided with me reading the book "Too Big to Fall" by Barry LePatner, a construction lawyer of New York City. LePatner discusses a number of cases, such as the collapse of the I-35W bridge in Minneapolis, in detail and provides a historical analysis of the incentives to built and maintain infrastructure. Unfortunately, the incentives are tailored to building new roads and bridges (where the costs are shared with the federal government), and maintenance tend to be postponed. Furthermore, there has been a lack of coordination on how inspections need to be done. While there are now standard inspections, new technologies might be used to create smart infrastructure to get more often relevant info on key indicators of the structural functionality of the bridges.
The book provides interesting material to start looking into the provision of bridging services as a collective action problem where current perverse incentives lead to an under provision of maintenance and inspections. Together with increased extreme weather events due to climate change, we can expect that this will have major consequences for our society. Unfortunately those topics do not get the attention in political debates that they deserve. Strategies have to be made how to cope with the failing infrastructure and increased vulnerabilities.